264 local folk shared their aspirations for Stratherrick and Foyers in February and March 2021. The survey responses are a fascinating insight into the community as it is now, and what we want to be.

Check out this independent summary prepared by the Community Action Planning team.

Question 1: “What do you like about our community? For example, what’s good about living or working here? What do you love about the area? What needs to be protected for the future?”

On the chart below, tap or hover over the bars to see how many times each topic was mentioned.

The things people most liked about the community all relate to nature, community spirit, people, and quiet unspoiled countryside. Each of those was mentioned by over 70 people, and they are summed up by these two quotes: 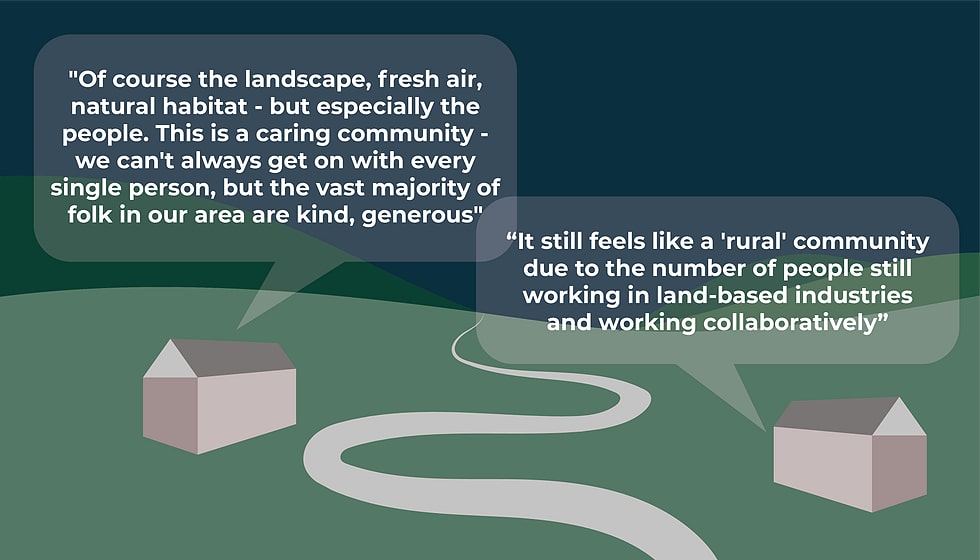 Question 2: “Other than COVID-19, what are the big challenges facing our community? What’s difficult about living or working here? These could be issues you face personally, or problems that apply to others or indeed the whole community.”

The circular diagram below has the same data but with more details. If you double-tap or double-click on a segment in the diagram below, it will expand to show more information.

By far the biggest challenge was transport, mentioned by 194 people (75% of respondents). The main specific concerns were potholes and winter gritting, followed by public transport and the amount and speed of traffic. The quotes below show that people were concerned about getting around the local area, and also getting to Inverness and Fort Augustus. 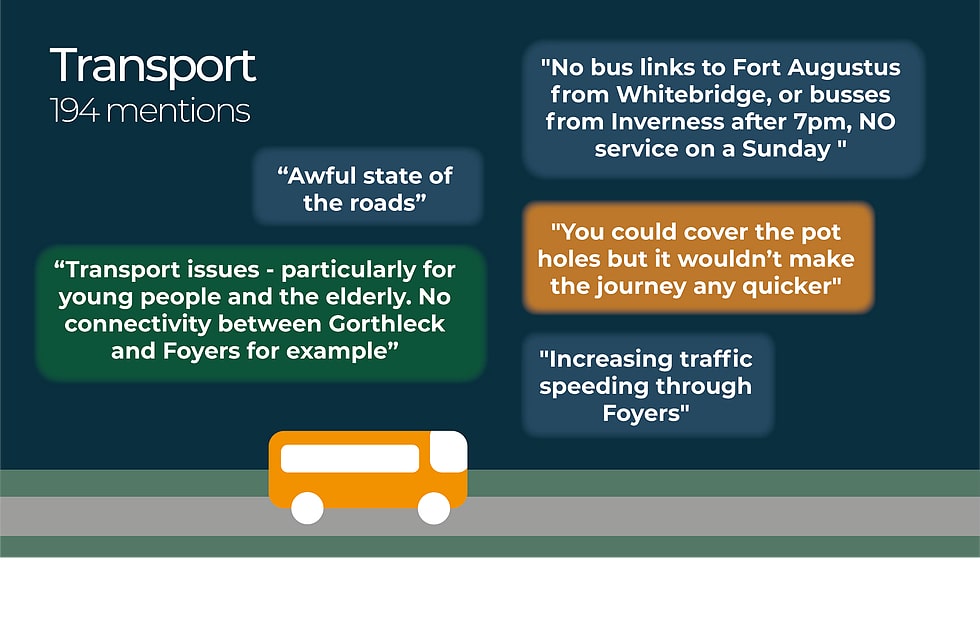 Facilities and services was the second biggest challenge, mentioned by 99 people (40% of respondents). This included broadband and phone access, maintenance (including paths, bins and woodlands), playparks, sports facilities and so on. The quotes below give a flavour. 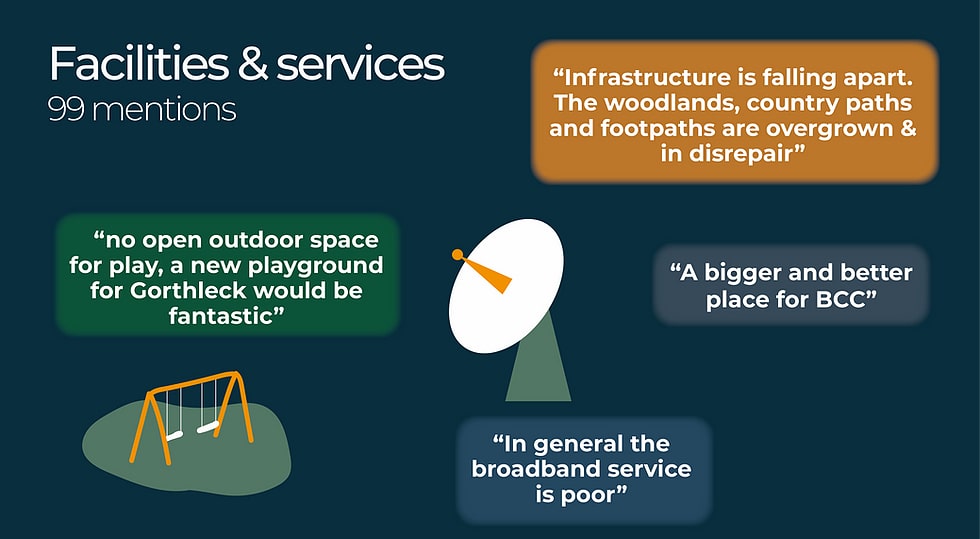 The quotes below illustrate some of the other challenges.

‘Housing’ focussed mainly on the lack of affordable housing (mentioned by 53 people, 20% of respondents). 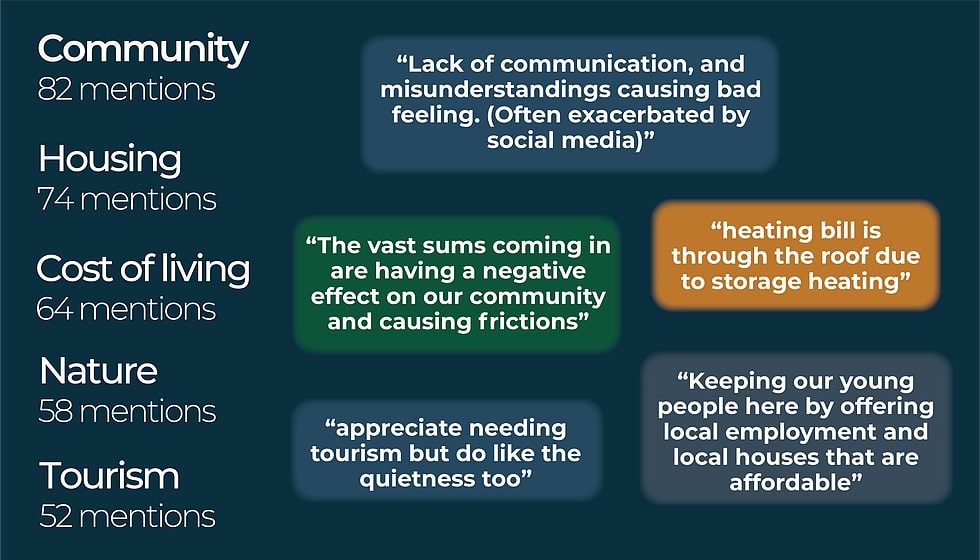 Question 3: “What are your aspirations for our community in the future? If you had a magic wand, how would you like the community to be in say 2040?”

We analysed the responses to Question 3 in two ways.

Firstly, we picked out common themes. The answer below from a pupil at Stratherrick Primary School contains two popular themes: poor roads (making it unsafe for people to walk or cycle along roads) and lack of facilities (in this case a playpark and shop in Gorthleck). 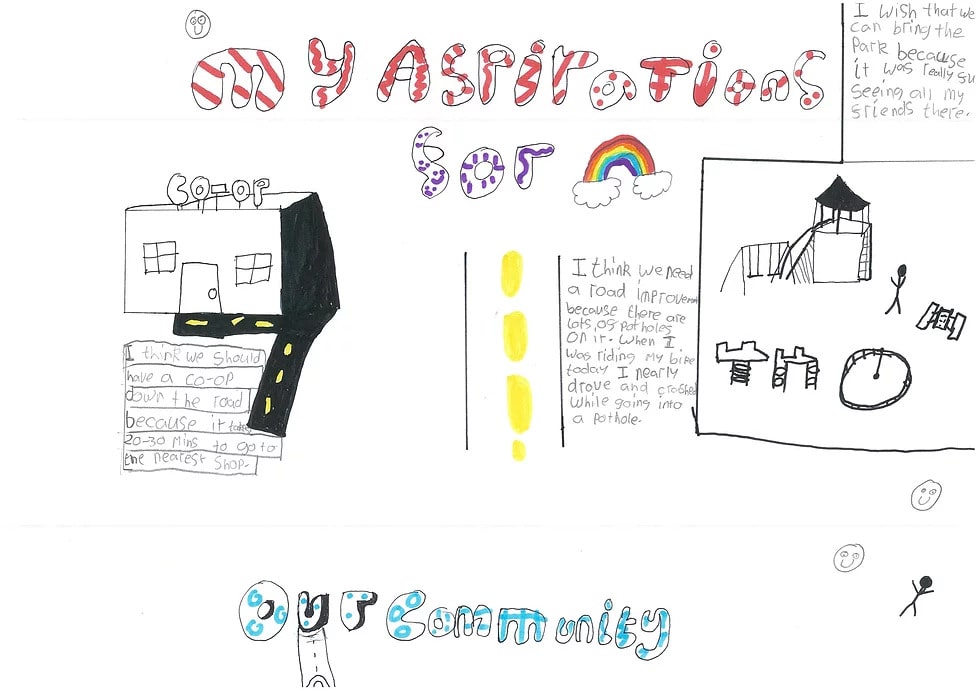 The top two themes, mentioned by 55 people each, were protecting the natural environment and more things for kids (like bike paths, activities, playparks and transport). If you tap or click on the bars in the chart below, you’ll be able to see the other themes and how often they were mentioned.

The second way we analysed the responses to question 3 was by recording specific ideas and how often they were mentioned.

The diagram below summarises people’s ideas, grouped into categories. The size of the circle relates to how often they were mentioned. Tap or click on a circle to zoom in and get more details.

The community survey took place in February and March 2021. Paper copies were distributed to every household in the area and the survey was made available online. It was promoted via community networks.

264 responses were received from a local population of around 820. That represents 32% of the local population. Response rates for similar community surveys elsewhere in Scotland are typically between 5% and 20%. 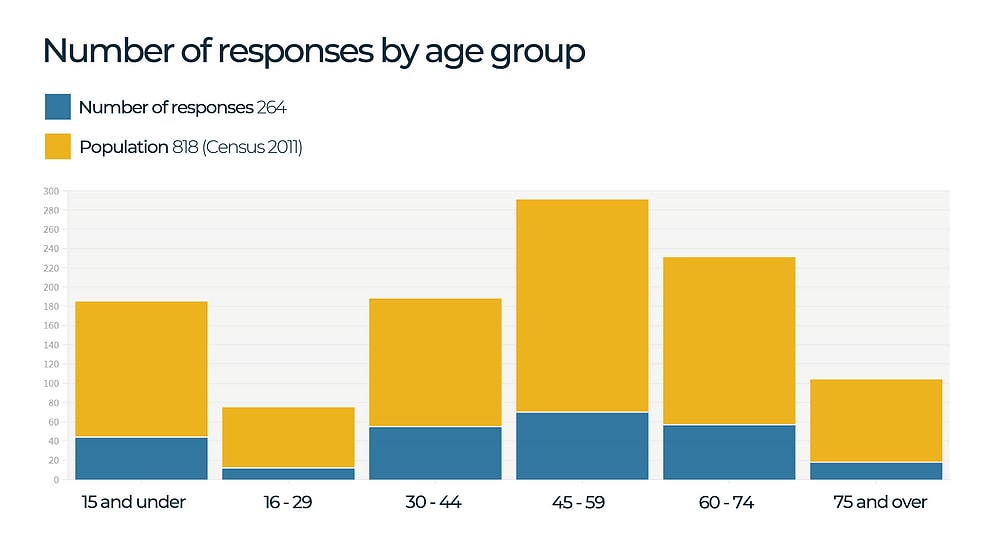 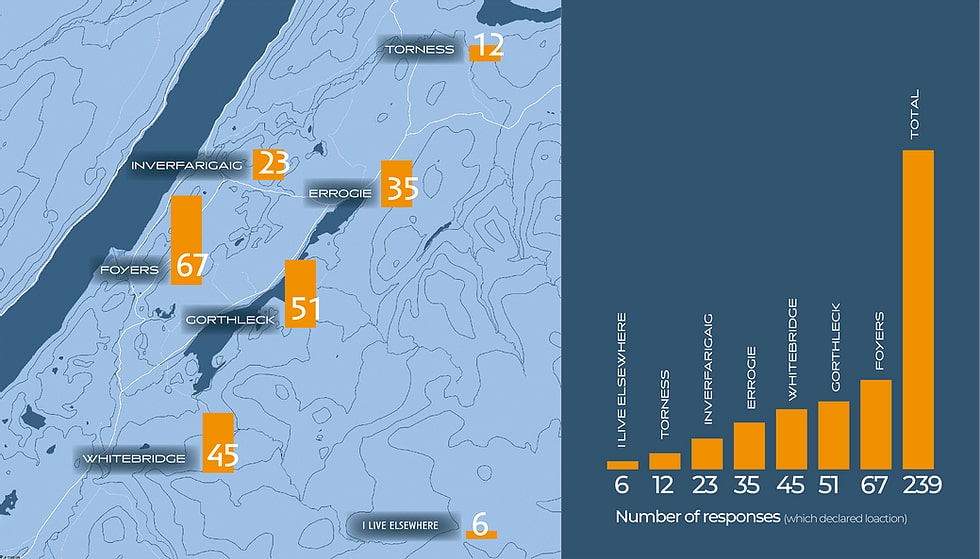 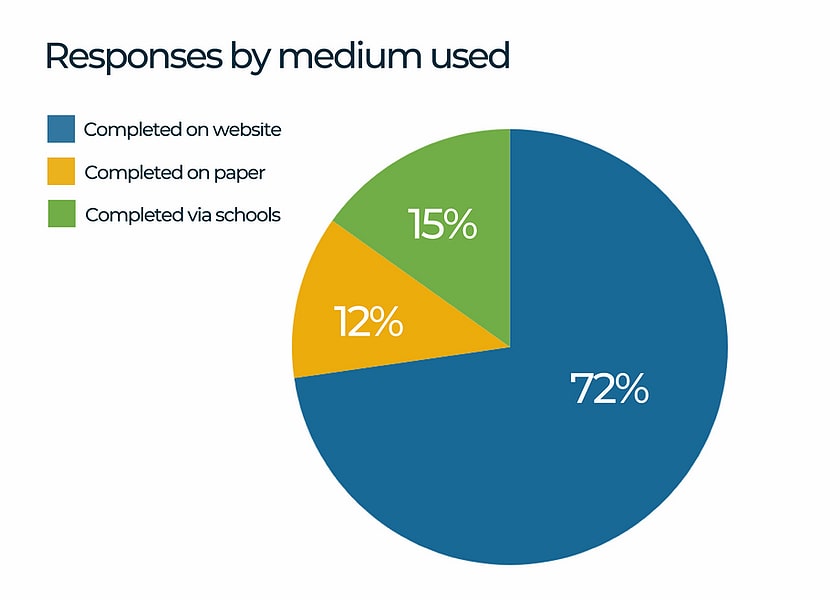 Thank you to everyone who completed a survey, and to all those who helped to encourage others to do so. With such a good response rate, the survey results form a strong basis from which to build the Community Action Plan.